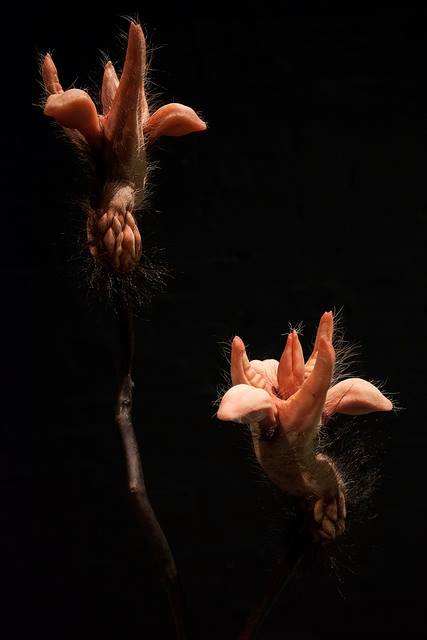 The Shadows Calling by eminent Australian artist Patricia Piccinini and Peter Hennessey, imagines the amazingly evocative space of the Mercury Building as a fecund and unsettled environment, where strange forces work to reclaim the building. There is a sense of decay and rebuilding, suggesting the idea of industrial biodegradability, where the technological world is broken down by natural forces to grow new forms.

The space is both empty and occupied. We see relics from some sort of expedition sent to chart the processes of transformation, but the explorers are gone. In their place are creatures and plants that sit in the space between the artificial and natural worlds. We are inspired by fungi, that are neither plants nor animals but their own unique …kingdom‘, and are both parasites and symbiotes, poisonous and delicious. These organisms are a vital but largely invisible instrument in the complex systems of the natural world.

Visitors enter the amazing space of the basement of the Mercury Building to discover that while it is deserted, strange organisms have started to reclaim the space. In the low, vaulted cellar that once housed the maintenance workshops, a field of strange, pallid flowers have grown up to fill the emptiness. In a series of cell-like rooms off the side, we discovers the remnants of an abandoned expedition that has been investigating these organisms. This makeshift campsite contains drawings and recordings documenting the new ecology of the space, and discussing its implications. These derelic spaces are overgrown by strange metallic insects and glossy fungus-like growths.

On the other side of the building, the hall that once contained the printing presses presents a loft contrast to the compressed gloom of the vaulted space. It has also been reclaimed by a strange new ecology. At one end stands a pair of figures; a ten year old boy and a matronly figure, who on closer inspection turns out to be some sort of amorphous organism. She is neither animal nor vegetable but somehow both – grotesque yet gentle. The two figures are surrounded by a ring of surreal objects; strange visceral plants, glossy growths and organic objects. They stand at the centre of a ring of growth that is beautiful and obscure.

At the other end of the room is a huge organism that seems to be growing out of the floor of the building. It is also amorphous, but more insect-like or animal. It is dark but not foreboding, seeming to be drawing form and nutrients from discarded objects and rubbish. It is like some sort of spirit of the building, given form – derelict but wonderful.

Between these creatures, is a raised platform, like a pulpit. At various times during the day, a woman mounts the platform and performs. She sings a strange song, an amorphous blend of natural and unnatural voice, directed at the massive building spirit. Perhaps it is an offering to the spirit to placate it, perhaps an attempt at communication.

The Shadows Calling is a sensual world: visual, aural, tactile, olfactory – although perhaps not gustatory. The exhibition includes sculpture, drawing, video, performance and narrative. Visitors have the chance to explore a dark, strange, beautiful world, where the boundaries between the real, the fantastic and the hypothetical are difficult to make out.

Presented by DETACHED in association with Dark MOFO 2015