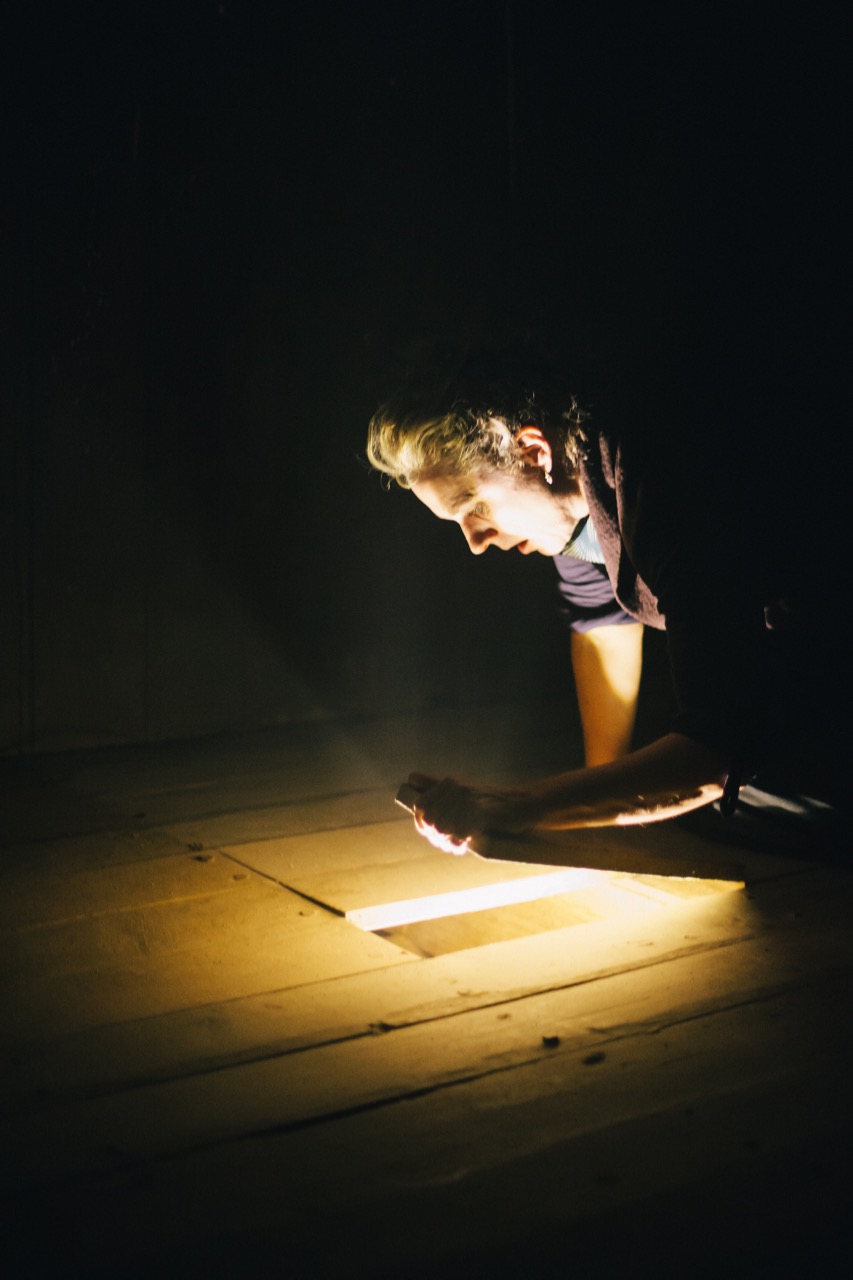 A site specific performance installation incorporating original sound, light and solo performer, the venue and inspiration was the historic Gunpowder Magazine, convict-built in 1850, situated on The Domain in Hobart. The clarity and purity of the acoustics of this chamber inspired us to create a an immersive installation.

A ‘green room’ is used to refer to the space in a theatre which accommodates performers before and after a performance, and during the show when they are not engaged onstage. What we wanted to take from the idea of a green room was this idea of waiting in a space between events and moments. When we first entered the gunpowder magazine we were impressed by the chamber’s stillness, its cold solemnity, and the reverence that it inspired. There was a quality of timelessness that prompted us to contemplate the fact that this building was built 163 years ago with the purpose of waiting for a war, a war which never came.

The Green Room is a site specific work in that nearly everything you will hear and see is derived directly from the extraordinary architectural features Magazine. Through light, sound and performance, Dylan and Jane hope to inspire a curiosity in this remarkable building, its complex architecture and extraordinary history.

Dylan and Jane met in January 2012 when they both participated in Salamanca Arts Centre’s HyPe workshop. The central theme of the two weekends was collaboration; the central provocation informing our improvised and planned performances created throughout the workshop was the 2007 Myer fire in central Hobart. They were partnered to prepare a short performance inspired by the fire for the final day of the workshop.

Working closely with workshop leaders, artists and creators, Deborah Pollard and Martyn Coutts, they found a tentative but abiding working collaboration based on our shared interest in investigating the human condition in non traditional performance spaces, via performance improvisation and digital technology.

They applied for a further HyPe opportunity in August 2012 when they engaged with the Like HyPe pitch process in partnership with Junction Arts Festival. At stake was $5,000 towards a Creative Development period and through the novel and liberating process of a ‘live’ pitch they won the grant on offer through an audience vote. They engaged in the Creative Development for The Green Room in November 2012.

It’s a rare hot day as I wade through the long grass on Hobart’s Queen’s Domain. The venue I’m ushered towards, the Victoria Gunpowder Magazine, is a place many Tasmanians have never seen, hidden as it is behind various sports grounds. Built in 1850 to house a mass of volatile weaponry—at its peak storing 1,000 barrels of gunpowder—the fortress-like edifice now appears neglected, surrounded by barbed wire fencing and accessed only on irregular tours by collectors of military memorabilia.

Inside this cold, virtual ruin, The Green Room, a site-specific production by solo-performer Jane Longhurst and sound artist Dylan Sheridan, is staged. This collaborative work is an outcome of the 2013 HyPe initiative, supported by Salamanca Arts Centre to encourage the creation of innovative, contemporary hybrid performance in Tasmania.

The fortress-like nature of the space seems more apparent on this day as the hot midday sun fades from view, the door is slammed shut and we are left in darkness. The marked difference in temperature somehow seems imperative, as this is an immersive work in which the audience is intimately connected to performer and to the space itself.

As we enter the room, Longhurst is already at work, sweeping the floor, stirring up dust. This sweeping—a recurring motif—is one of the ways the performer engages with the space, as tension builds around her choreography of physical gestures and interactions with a series of found objects such as rope and old gunpowder drums. In one suggestive sequence, a piece of rope falls to the floor which Longhurst then ties between two timber posts and swings on for a very long time, the rocking motion marked by the clocking sound of her boots against the floorboards. That I am disturbed by this—perhaps something to do with Longhurst’s proximity to the audience—says much about the potential of site-specific works to perturb common associations with a place.

The waiting game played with the audience is not only a test of endurance but also a sharp reminder of the site’s failed ideological function as a place awaiting a war that never came. This is alluded to in the work’s title, a Green Room being a space that accommodates performers when they’re not performing.

This preoccupation with the interstitial appears a central concern throughout the work, particularly in Sheridan’s exceptional use of atmospheric lighting and sound. With light glowing from the cracks between floorboards and hidden in crevices in the walls and a haunting soundscape ranging from a dull throbbing to metal scraping sounds—all of which were derived from field recordings at the site—the place takes on the guise of a character that taunts Longhurst. A point of brilliance is the performer’s response to a sound under the floor: floorboards are lifted, revealing a gentle, diffused light. This attention to the in-between and the duration of the interval creates a strange, resonant atmosphere where energy appears to seep through the very cracks of the building achieving a new and altogether more intriguing illumination of a hidden place and its stories.

As the work ended where it started—with sweeping—I was left with the impression that I was merely an interloper in a scene that would continue for the remainder of the day. The movement challenged and piqued its audience. With the room hazy from dust stirred, we emerged sneezing, stimulated by the textures of this strangely haunting place—and intoxicated by its smell and taste.

Emily Bullock is a Hobart-based writer and teacher. Her PhD on the cultural poetics of Tasmanian Gothic was completed in 2009.

In my utopia, art would be intimate. Art would compel people to think. Art would take place in interesting venues. The Green Room gave me a taste of my utopian dreams.

In this work, The Green Room, Jane Longhurst and Dylan Sheridan were able to create something challenging and invigorating. They have made the overture to an endless and communal symphony, that each of us can carry and add to daily.

On a sunny first day of summer I drove to a much ignored historical part of Hobart, the Victoria Gunpowder Magazine on the Queens Domain.

I arrive early, and entertain myself with a stroll along Soldiers Memorial Avenue. A bleak and silently beautiful memorial to those sacrificed in the Great War . Alone but for the wind on my face and the song of the birds, this quiet futility of war moment places me in the right frame of mind for the Green Room .

The audience is led to an intimate dance floor . A woman is dressed in black:. is she a servant or a mourner? As she endlessly sweeps the floor with her old fashioned broom, Dylan Sheridan’s modulated rumblings signal a dreamy twilight entrance and a beginning. A theatre of gesture and sound follows, filling the abandoned space and transmuting the audience. Minimal lighting adds a thrilling unity.

Years ago punks prided themselves on breaking the distance between performer and audience. The Green Room extends this idea. The audience becomes the performance. The rustling of clothing – the string section, shifting feet – percussion, breathing – woodwind. Peristaltic motion forms the brass section, breaks down barriers, and at the same time raises questions and the audience becomes part of the performance. What is meant to be heard? What is performance? What is real?

Jane Longhurst performs a silent dance; her movements layering questions and her very being becomes ambiguous. A ghost of the long empty gunpowder magazine? An echo of the forgotten Crimean War? The fear of Tsarist expansion? The endless domestic labour of women? Or is her sweeping structure for the soundscape?

The performance doesn’t end, rather it fades and changes location. Walking away from the keyboard, doors open and the audience slowly melts away, a simulated ending. Once everyone has left the room Jane finishes her sweeping and her dance. And we are outside in the light and the real world. Off in the distance a band plays, birds sing, conversation flows. The performance continues without end.

In all this was a fabulous production; a subtle and revolutionary work. Simple and complex, artless and polished, all at once. Equal parts theatre, dance, installation and composition. All bundled up with questioning strings, in a appropriate and interesting venue. A venue that not only allows intimacy, but forces intimacy upon the audience and performers alike.

Congratulations to the Salamanca Arts Centre’s HyPe (Hybrid Performance) Program for nurturing innovation and allowing this and many other vigorous performances to be created in and around the local area.