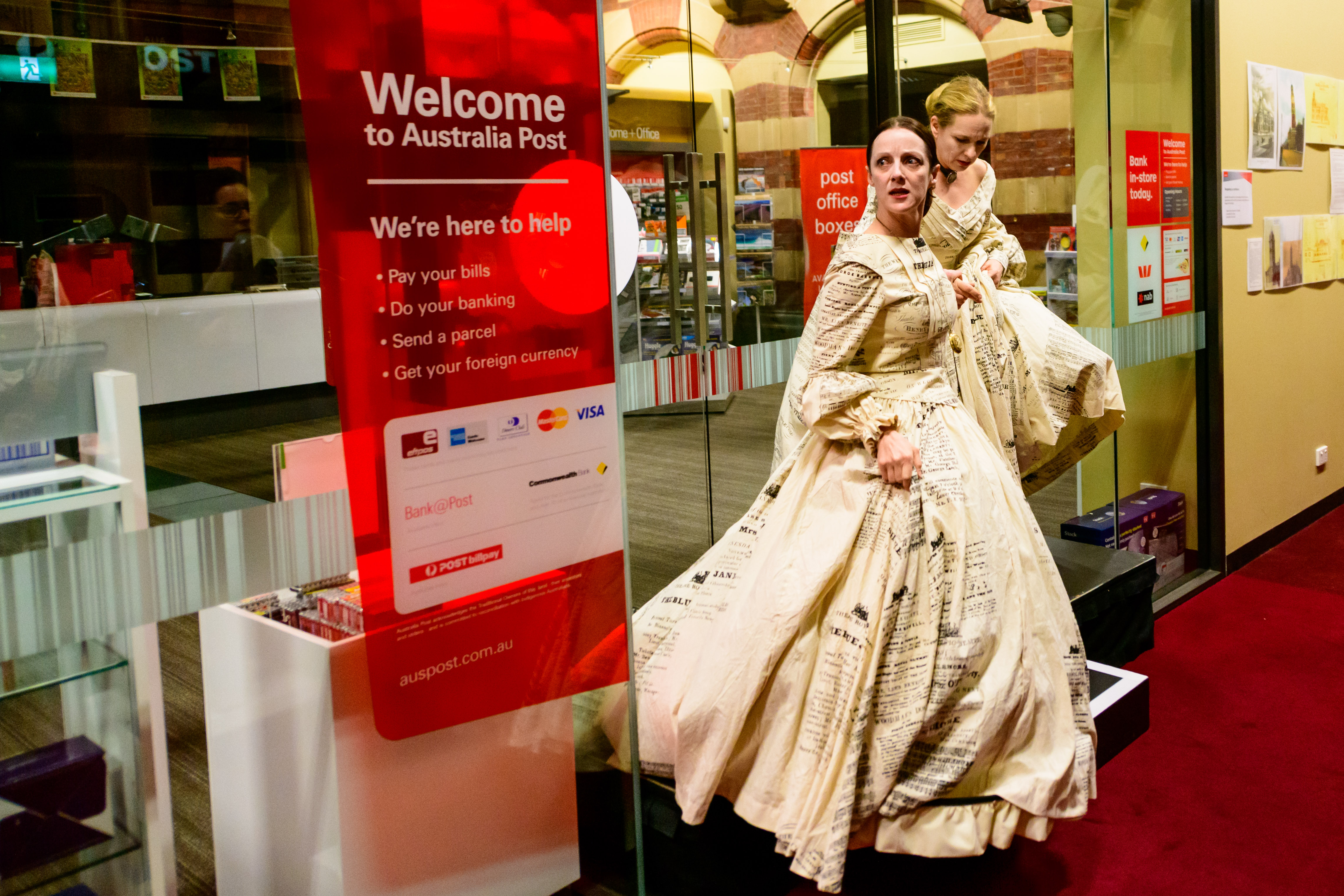 Ghosts of the Olympic Theatre

‘Drawing on her extensive research into leading performers in Australia in the 1830s-1840s, Jane Woollard raises the spirits of four colonial actors, conjuring them to reoccupy the space of the old Olympic Theatre, now Launceston’s main post office.

Reliving an evening at the Olympic, the ghosts gossip, gripe, rehearse, prepare and perform. Woollard skilfully weaves research and entertainment into scenes rich in historical detail and dramatically satisfying. Her fine cast honoured the memory of their ghostly predecessors, and a particular pleasure was the voices of this sonorous quartet.

Less successfully, Woollard, head of theatre and performance at the University of Tasmania, includes a second cast of five students, who discuss aspects of nineteenth century acting. These scenes have the tone of an academic treatise, and do not engage. Hopefully in future iterations Woollard will find a way of dramatizing this critical material as successfully as she has the experiences of her ghosts.

This flaw aside, the show is educative, entertaining and curiously affecting. The theatre is one of the most ephemeral of artforms, yet, with the ghosts reoccupying the same air where they worked, bared their souls and gave their all, and giving them the time to live and breathe that same air again, the show movingly evokes a deep permanence’.

Now you see me, now you don’t: Gathering the stage ghosts

Theatre’s ephemeral acts of gathering can allow us to say ‘hello’ to the past. In my 2017 play Miss W Treads, the performer playing the ghost of nineteenth-century performer Eliza Winstanley magically appears. Sitting on the stairs above the stage, she is concealed by a black cloth, invisible even though she is in full view of the audience. On her cue to enter, the performer stands and throws the cloth from her head and shoulders. Through clever theatrical fakery, she is a vision of the past materialising, the ghost of Eliza now among us. This theatrical moment is emblematic, a troubling stone in my shoe, as I work towards a methodology of historical reconstruction. Had I created a ‘probable impossibility’ to ‘make the fantastic look real’? (Kessler and Lenk, 2019) Did I merely present a ruse – an elaborate trick of the eye?

Through close reading of archival sources, it is possible to become familiar with the what-when of the past. But the how of historical events is elusive, open to interpretation, and as a theatre maker, I cannot help but imagine them, gathering the ghosts together from scraps, fragmentary descriptions and archival hearsay. Collaboration with a skilled performer, and an imaginative creative process brought the ghost to life. She was a fiction that felt plausible, a speculative yet material embodiment. In rehearsal and performance, the ensemble, myself and the audience came to believe in her as a version of historical truth. Surely she was like this? Could this have been how she looked and sounded? Bringing my imagination to bear on my historical knowledge, I invoked a ‘flickering suspension’ (Sleigh-Johnson 2018), an embodied version of the past.

Post-show, I continue to grapple with a mixture of astonishment at my own imaginative presumptions, and anxiety about the unknowable past. In this paper I will explore what we can know about nineteenth century performance through a mix of creative speculation and forensic historical research.

Jane Woollard is a theatre director, researcher and teacher, and graduate of Melbourne University, VCA School of Drama, RMIT and La Trobe University. Jane’s doctoral research investigated the life and work of Eliza Winstanley, star of the early Australian stage. Jane has extensive experience as a teacher of tertiary Theatre and Drama subjects, having taught at Monash University, University of Melbourne, VCA Theatre and at La Trobe University. Now based in Launceston, Jane is Head of Theatre at the School of Creative Arts, University of Tasmania. Jane’s play about Eliza Winstanley, Miss W Treads, was presented at La Mama’s Courthouse Theatre in September 2017. Her most recent work is Ghosts of the Olympic Theatre, 2019 Junction Arts Festival.