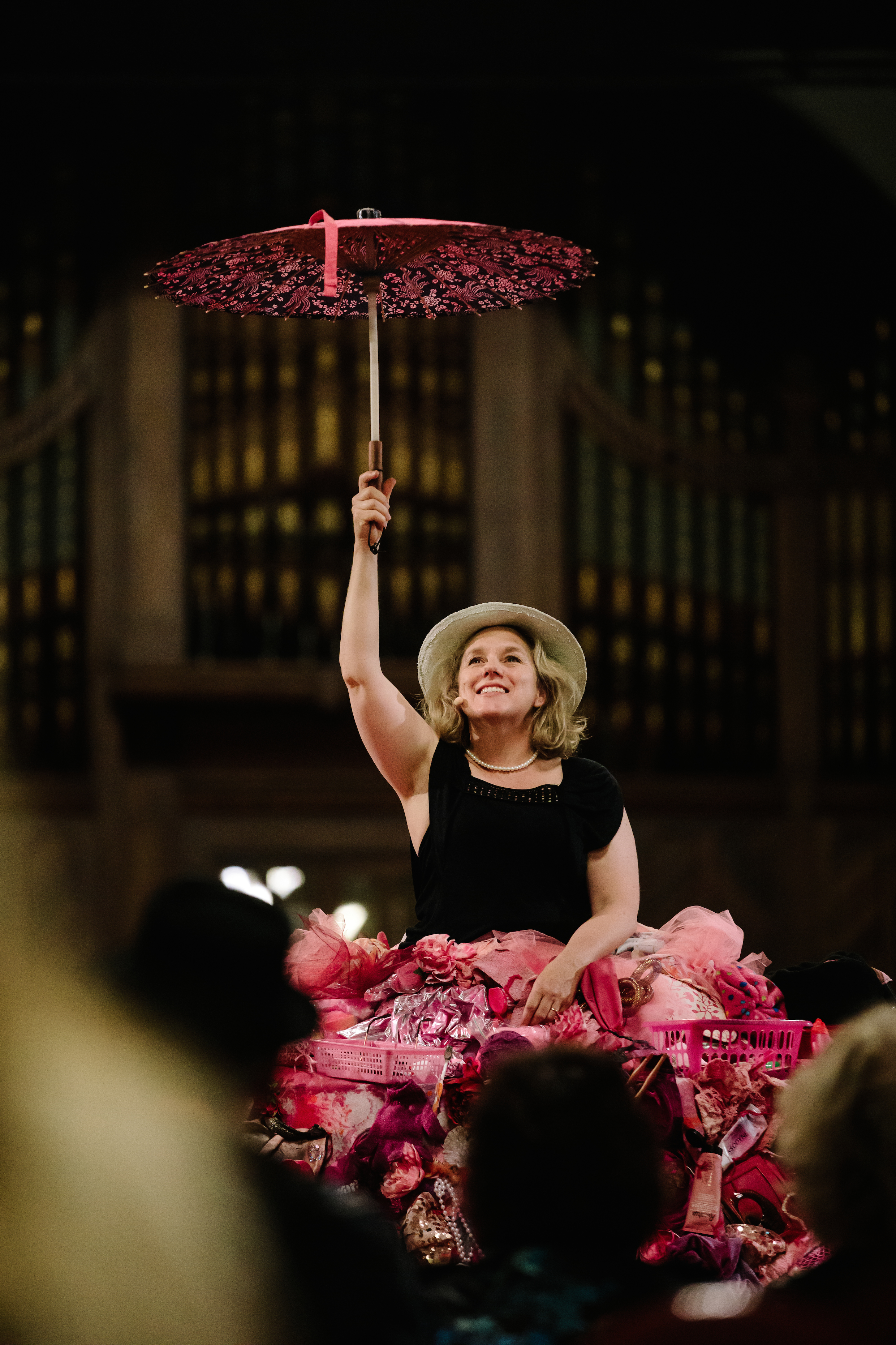 Jane Longhurst in association with Blue Cow Theatre present the first of The Black Back Trilogy:

Critical Response:
‘As I go further along, what really kills a lot of art for me is didacticism. When a work of any kind is directly nailed to one interpretation alone, it makes that work easy to box in, peg down, and ultimately discard. This is not to say we do not need theatres of protest or art that addresses issues in an immediate sense – we desperately do, in fact – but this art, married to a precise context, may fade with time. That’s not a big deal though – flowers fade and all things pass.  That might have been something that motivated Beckett to make a play like Happy Days, but it’s likely not the only motivation.

Beckett himself could be famously mum, answering questions about his work with a shrug.   This is it though: Beckett did not provide answers. He asks questions.   I went along to the museum courtyard on a hot day, and sat in the sun, wearing an absurd appearing but solar-practical hat, and I was given no answers at all. This was relieving. I didn’t want any. What I wanted, at least at first, was to see an actor I expect a lot from to do something interesting. This was a given, and that was interesting in itself: I expect Jane Longhurst to give a good performance, and to have some understanding of the script – not one that concurred with mine, I just wanted her not to be bluffing about engaging with the text. I didn’t think she would, but you know. People can fail. Longhurst did nothing of the kind, and we were plummeted into the strange world of this singular play.

Happy Days is horribly absurd and hilariously bleak. Beckett can contain humour and farce, and he writes his works at the point in history when much of the world had paused after the second world war, and had finally begun asking what humanity was now after the very worst was known. His works contain futility, but they also recognise that futility is sort of funny: the humour is exactly in the unrelentingly bleakness. Winnie is a comedic character as much as she’s a tragic one.   Winnie is human, tired, fleshy, aging, trapped and not giving up just yet. That’s the interesting thing about this script and it seemed to be a key to Longhurst’s take: Winnie is trapped, she can’t move and she is trying to make the best of it. She does not collapse and weep and bemoan her fate. You know why? That won’t change a thing.

… I was totally entertained. I laughed, under my absurd hat. I worried about the situation and saw exactly how it applied to everyone watching, all of us members of the audience in our socially distanced seats. I was uncomfortable, and the play had worked: lured me in with giggles. Got me thinking. Led me to somewhere uncomfortable, that was possibly still very useful for me to consider’.
Response by Andrew Harper, artist and writer

Presented as Performance 01 of the Black Bag Trilogy and ‘… one of the 40 Best Plays of All Time’ (The Independent), there could be high expectations afoot for this play. Yet popped in the MONAFOMA 21 Northern program, it is a little gem amongst many works, in a variety of media, pursuing the theme of identity and offering opportunities for self-reflection.

Relocated from its intended park surrounds to the cavernous Albert Hall, one could imagine that something of the original intent could be lost. Instead, the surreal image of Winnie (Jane Longhurst), planted in the centre of a heap of pink plastic detritus, immediately draws the audience into the mysterious and monotonous world of the two characters.

Iain Lang as ‘Willie’, is bent over scanning and rocking back on the fragile chair, while ‘Winnie’ greets another day claiming it no worse, no better than any other. The motif of no change is dragged through this work, along with accusations of a lack of zest, or of memories of the past.

The audience could concur that we are all waiting for the day to come when flesh actually melts and the plastic mound that surrounds Winnie finally engulfs her.
Yet as we settle into the pace of this work, it is the slowly revealed details that emerge from the plastic debris of life that intrigue.

Contrasting Willie’s slow pained shuffling, Longhurst’s Winnie gabbles and grabs at thoughts, seemingly to fill the void with a lifetime of misunderstandings. As she admits that there is so little to say and so little to do, we are forced into the reality of her day-to-day existence, reflections, and regrets.

The pink plastic debris (piled if a massive mound not dissimilar to a toilet roll holder dolly’s dress) offers small distractions, but it is difficult to avoid thinking that this is all the evidence that is left as of a life well lived. Winnie just needs something to move in the world, while it seems Willie would like something (or someone) to move her on in the world.

Yet there they are, stuck in a cycle regimented by the bell. Time to open your eyes… time to close your eyes. In the end perhaps its time to just ignore the bell….

Longhurst’s Happy Days is both poignant and perplexing as it reeks of the reality that humanity seems hellbent on driving itself towards.
Lesley Graham

Stunning performance today at TMAG. Regarded as one the most challenging of near-solo roles, Jane was magnificent. It cut very close to the bone and I am so glad I was privileged to see it. It felt very like our current predicaments, and not absurd at all. Aren’t we all combing our hair, hoping someone someone witnesses our existence, while the earth heats up ever more. power to Jane, for setting herself such mountains to scale and conquering them with such elan and craft. Onwards!
Frances Byers

Images courtesy of the artist and Mona, Museum of Old and New Art