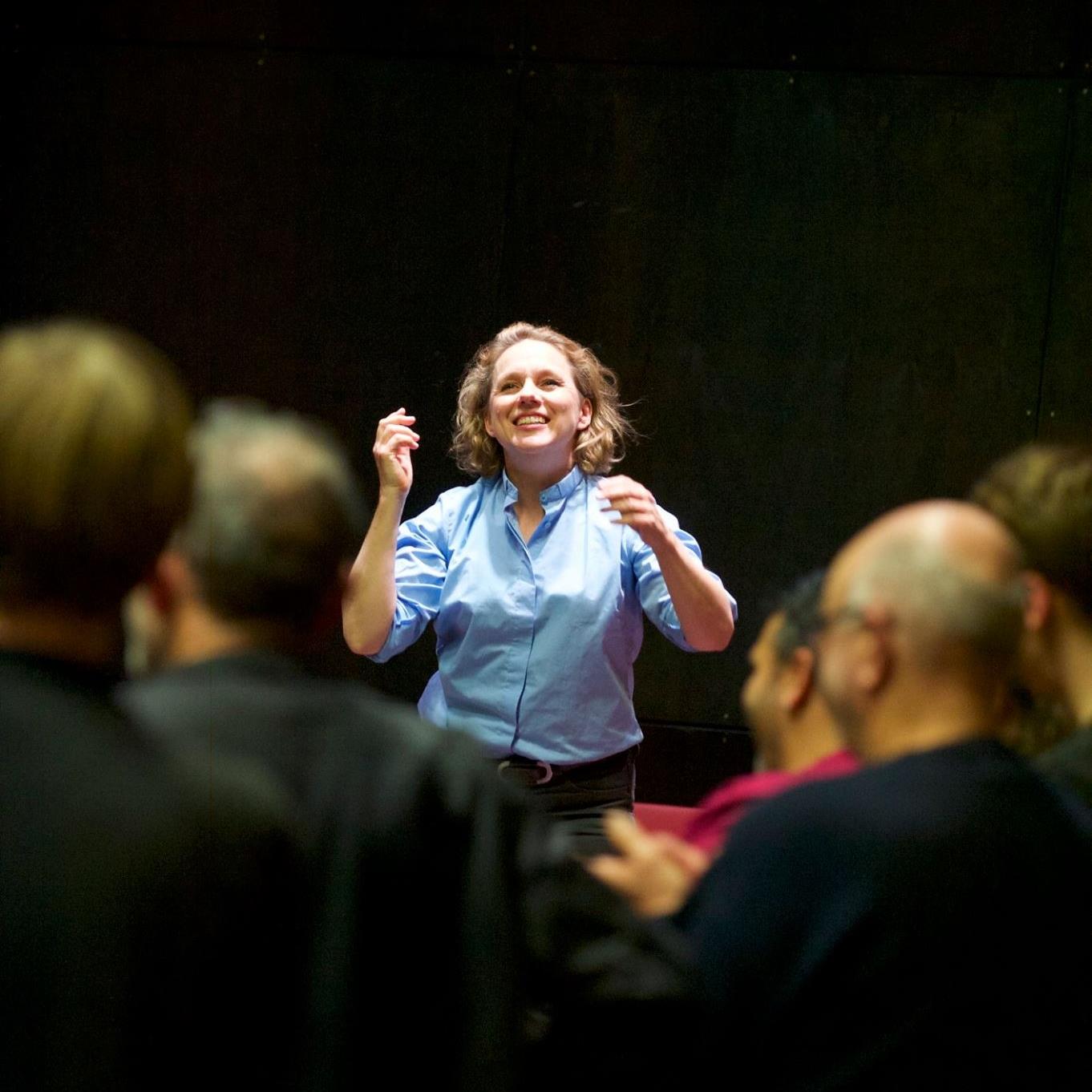 ‘How do you create theatre where the central event is an extreme act of violence against a whole community?

You set the play in, and have your target, the rehearsal room of a community choir.

That is the genius of Scottish playwright David Greig’s contemporary examination of a mass shooting in this superb production by Hobart’s Blue Cow Theatre.

Played on alternate nights by three local choirs and set in the clean, simple surrounds of the Moonah Arts Centre’s wooden studio space, the only props are a few chairs, a tea urn and an upright piano so the world of the play is instantly recognisable.

The choir, like so many elements in this play, operate on multiple levels: a metaphor for community strength and vulnerability, witness, perhaps even jury, to the main character’s actions and plight.

Acted out before the chorus is the story of the principal character, choir mistress Claire (Jane Longhurst) and her disastrous encounter with the Boy (Rob Mallett).

Again, Grieg’s genius is to extend the status of tragedy to both roles because both, in their very different ways, claim the role of saviour.

Director Robert Jaman brings restraint and a masterful sense of less being more to what is an utterly compelling and strangely uplifting experience.

And the two principal performances? A double act to cherish. Longhurst works an emotional range from quiet dignity to the most viscerally violent. Rob Mallett, an accomplished musical theatre artist, shows he also has serious acting chops. Working half a dozen characters, he brings a restless, shadowy quality to the roles – a perfect foil to the desperate-for-answers Claire.

Both performances are stellar, but it is the combination that sets this production apart’.

‘Don’t miss an extraordinary piece of theatre! This powerful play captivated me from beginning to end! The Events is another of those splendid productions we have come to expect from Blue Cow Theatre. Jane Longhurst and Rob Mallett deliver superb performances under the expert direction of Robert Jarman. A community choir accompanied by Aaron Powell is part of the action….Don’t wait til next week in case you miss out!!’ Noreen Le Mottee, 12 July 2017

‘Saw Jane Longhurst & Rob Mallett in The Events tonight. It’s a beautiful and gruelling journey I recommend to lovers of theatre and anyone who seeks to understand, even to forgive the violence of our times. Thank you Blue Cow. Thanks Robert Jarman. Bless your beautiful minds and your skill Jane Longhurst & Rob Mallett’. Susan Wallace, 12 July 2017

‘I know it’s a busy time with so many great shows in Festival of Voices but do not miss Blue Cow’s production of The Events at Moonah Arts Centre. A well crafted examination of a highly complex situation, beautifully directed by Robert Jarman with really gutsy, nuanced and strong performances by Jane Longhurst and Rob Mallett. The force of it bowls you over’. Fiona Barber, 12 July 2017

‘I went to see a play last night. I could tell you my impressions of the show and how it affected me. I could detail the performances, or discuss the staging, the music, the writing, the direction etc. I’m not really a competent reviewer though.

What I CAN describe, though, is the audience’s reaction at the end. After the applause (which was *lengthy*), when you might expect people to start getting up to leave, no-one moved a muscle. The entire audience sat, stock still, absorbing what it was they had just experienced.

I watched them. I was processing the play myself, bit I was still fascinated to see that no-one moved out of their seat for at least a minute. People either sat looking straight ahead, thinking, or were involved in earnest discussion.

This play is a remarkable piece, and it has been skilfully crafted by all those involved in its production.

I cannot recommend The Events strongly enough. I don’t urge you to see it to support local theatre (although everyone should). You should see it for your own selfish reasons. To be moved, and to experience theatre at its best.

That said… I want to tag Robert Jarman for outstanding vision in directing it, Jane Longhurst for a gut wrenching performance, and Rob Mallett – for some of the most amazing characterisations I’ve ever witnessed. (Seriously, he keeps a collection of individuals in his pocket or somewhere, and whips them out as required).  Jeff Keogh, 13 July 2017